If Sherlock Holmes and Veronica Mars had a kid, it would be Kate Gardener.

A force of nature with a “photographic” memory, Kate Gardener has an eye for solving crimes… and there is plenty of crime afoot in London. Feisty and fearless, the American forensic photographer gives the straight-laced detectives of New Scotland Yard a run for their money, both on the case and off.

Featuring a tour de force of spectacular London locations; plenty of thrilling action and snarky humor; clever crimes; and a brilliant cast of supporting characters, the Kate Gardener Mysteries will suck you in and won’t let go. 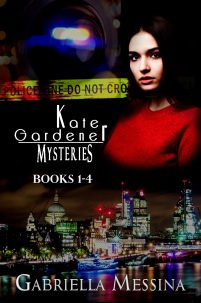 A vicious serial killer and a decade-old cold case confront American photographer Kate Gardener as she joins the forensic service in London, and she quickly finds that the murderer may be too close for comfort.

A priest murdered… a young man accused… Revenge is the presumed motive, but Kate Gardener soon discovers that all is not as it seems, and the real killer may be poised to kill again.

The violent killing of two police officers puts Met detectives in the spotlight, and Kate Gardener must race against time to find the truth before an innocent man is condemned.

The dissected body of a young woman triggers a media firestorm as her confessed killer winds up dead as well. Sex and murder, and a mysterious dark lady from the Crown Prosecutor’s past may be behind it all.